Eastwood: notes on the ecclesiastical antiquities of the parish

Eastwood: notes on the ecclesiastical antiquities of the parish

TABLE OF CONTENTS. CHAPTER I., 9 Origin of parishes, and of Eastwood — Early Christian teachers in Scotland — S. Oonval, his identity — Others of a like name — His arrival in the West — Inchinnan — His ordination and labours — Condition of neighbourhood — Some early places and names — Carwadric — Auldhouse — Old well beside the Saint's settlement here — Bangor's hill — Burnfield — The monastery — Difficult question as between Pollok and Eastwood — Grant of the Church of Pollok — Early names of the Church — Other place names — S. Conval's public services — Funeral of King Aidan — Coronation of Kenneth I. — S. Conval's writings — S. Conval's day — Death and interment — His stone — Archdeaconry. CHAPTER II., 31 Obscurity of mediaeval period — The Celtic Church reappears — Church of Westwod in 1265 — Various of its vicars — Controversy as to an appointment — Layng successful — His character as rural dean — Robert Maxwell, Bishop of Orkney — His services and benefactions. CHAPTER III., 39 The Reformation — Office of reader — Mr. Thomas Jak first Protestant vicar — His prior offices and history — Several parishes under his charge — Imprisonment and molestation — Eglinton family — His death and effects — His family — His Latin poem — Story of his daughter's abduction, a curious and romantic account — Erection of Church of 1577 — Its inscription stone — Other remains — Plan and division of the Church — Burial vault — Recollections of old inhabitants — Next two ministers. CHAPTER IV., 53 Rev. George Maxwell — Rev. John Maxwell — The latter's checkered history — The Glasgow Assembly of 1638 — Mr. Hew Blair's ministry — Mr. Maxwell's eventual return to Eastwood — His second ministry there — Enlargement of the parish — Failing health and demission of the charge — His son succeeds to Pollok — Mr. Maxwell's addition to Auldhouse — Memorial stone there. CHAPTER V., 64 Soldiers of the Commonwealth invading the Presbytery — Mr. Hugh Smith called and ordained at Eastwood — His brother, William, minister of Largs — Mr. Hugh's persecution — Deprived of his charge — Mr. Jamieson of Govan, and his wife's testamentary inventory. CHAPTER VI., 69 Mr. Robert Hume, Mr. Hector M'Laine, and Mr. William Fisher, incumbents under Episcopacy — The latter shelters the persecuted laird — He himself " rabbled" — Deserts his charge from fear — The parish under Episcopacy — Sir George Maxwell persecuted, imprisoned, and lined — Mr. Smith's outed ministry — The Sacrament dispensed at Haggs Castle and at Kennishead — Mr. Wodrow's father preaching in Haggswood — Characteristic account from Galt's Ringan OUhaize of Sir George's benevolence — His son. Sir John, suffers like his father — Sufferings of other parishioners — Thomas Jackson persecuted and banished — John Park and James Algie suffer martyrdom — Robert King submits and escapes — Banner of the Covenant at Eastwood Mains. CHAPTER VII. 86 Witchcraft at Polloktoun — Sir George assailed by hags, and soon after dies — His son's descriptive account of the case — Professor George Sinclair and his celebrated book — An extraordinary girl and her revelations — Making and roasting of images — Mr. Hugh Smith, minister, also bewitched, and his sufferings — Four women and a young man found guilty and executed — Scene at the gallows — The girl Douglas and her subsequent history. CHAPTER VIII., 96 Mr. Hugh Smith's death — Mr. Matthew Crawford privately called and ordained — His early life — In Holland with Carstairs — His published writings — His history of the Church in MS. — His public services to the Church after the Revolution settlement — His regular appointment to the parish at that period — Repairs on the church and manse — Declining health and death — His family — Commencement of the Session Records — Their contents — Place-names — Character and habits of the people. CHAPTER IX., 106 Mr. Wodrow's appointment and ordination — The Wodrow family and their connections — Professor James Wodrow — Merkdaily meeting-house — His persecution before the Revolution — Stirring scenes, especially at Wodrow's birth — Early recollections — Landing of the Prince of Orange — Wodrow's life of his father — Librarian of the College — Residence at Pollok- — Study of mineralogy and of antiquities — Parish work — Pulpit oratory — Proposed translation on different occasions. CHAPTER X., 117 Circumstances which led him to contemplate his history — Diligence in collecting materials for it — Apologies for its imperfection in style — Its publication — List of names of subscribers — Grant to the author from State Exchequer — Evidences to its trustworthiness — New edition in 1829-30 — Other publications — His published correspondence — The Holy Communion at Eastwood — His Analecta. CHAPTER XI., 127 Mr. Wodrow's marriage — His widow's removal to Glasgow — His sons, daughters, and descendants — His catechetical lists — The Session Records in his time — Lord Pollok — Communion Cups — Parochial schools and schoolmasters — Stewart of Pardovan — His collections — His death at Pollok — Interment at Eastwood, and memorial tablet — Wodrow's last illness, death, and burial. CHAPTER XII., 138 Mr. Wodrow's son succeeds him — The parish in his time — His retirement, and death at Cumbrae — Mr. Simpson appointed — Objections to his settlement — Removal of the Church to a new site — That Church's history — Is replaced by the present edifice in 1862-3 — Description of the same — Change of site of manse, and excambion of glebe in 1854 — The King's Covenant — Mr. Simpson has Mr. M'Caig appointed as assistant and successor — His brief ministry and death — Mr. Stevenson McGill becomes incumbent — His translation to Glasgow — Mr. Robert Anderson the next minister, and his translation to Edinburgh — Rapid succession of ministers, and memories of them — Mr. George Logan — His student life, earlier charges, aud appointment to Eastwood — His characteristics and his ministry — Anecdote — His intended demission — His death — His family — Mr. McIntyre's appointment — Low state of the congregation after the Secession — His death, and appointment of a successor — Church extension in the latter part of last century — Memories of Sir John and Lady Matilda Maxwell, of Darcy Brisbane (Lady Maxwell), of Mrs. Ewing, of Sir William and Lady Anna Stirling Maxwell, and of others — Conclusion. Digitized by Google.

Master and use copy. Digital master created according to Benchmark for Faithful Digital Reproductions of Monographs and Serials, Version 1. Digital Library Federation, December 2002

Description based on print version record 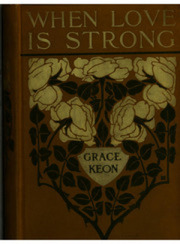